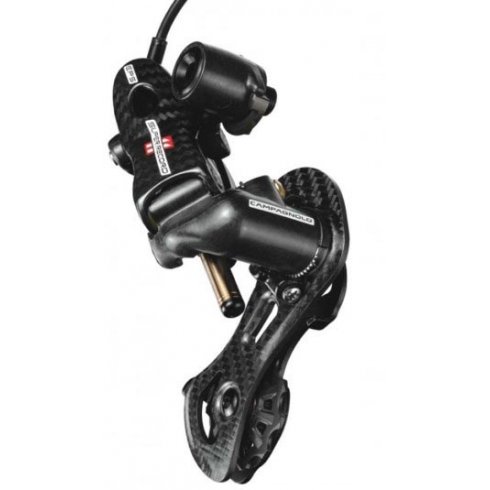 As with the mechanical parts, the rear derailleur represents the pride and joy of the EPS project and encompasses a series of technologies and innovations that allow shifting speed to be optimised and guarantee unprecedented precision, even in the case of multiple shifting with 11 sprockets at a time.

The geometry of the parallelogram has been made more rigid and optimised to promote interaction with the electronic parts.

The lower and upper bodies, the parallelogram and the carbon derailleur cage are moved by a screw system and lead worm screw (not a spring screw) which, in turn, is enabled by the electronic actuator that communicates with the DTI. The built-in resolver inside the actuator is capable of reading the movements of the rear derailleur at any time and optimising its position by communicating with the DTI (Digital Tech Intelligence).

The rear derailleur is also equipped with a play recovery system using a helicoidal spring that optimises stability and precision and keeps operation and performance constant over time, even after many kms have been covered.

As with the mechanical rear derailleur, it is possible to optimise its position with respect to the frame and chain by acting on two adjusting screws: the screw that adjusts the mechanical end stop and the screw that adjusts the distance between the upper pulley and sprockets. By using these screws it is possible to optimise the installation of the rear derailleur and increase the precision of its operation.

DTI: Digital Tech Intelligence is housed inside the Power Unit and it continuously monitors the signals that arrive from all the EPS components, thus managing their operation.

MULTI-SHIFTING: There are no longer any limits to Multi-shifting and the choice is at the fingertips of the cyclist.

WATER PROOF: In order to achieve the IP67 classification, all the electronic components of the EPS system underwent a series of tests, which proved their ability to function perfectly under one meter of water for at least 30 minutes.

We hope that you find our website easy to use but if you do have any questions at all please feel free to call our sales team on 0208 508 0682 or email info@tritoncycles.co.uk for advice.

Payment - We accept most major credit and debit cards through our secure payment provider Sagepay. All transactions are 100% secure so you may shop with confidence that your details are safe.

0% finance available on selected bikes. Spread the cost of your new bike over 6-36 months. Min. 10% deposit. Terms and Conditions apply.

We also accept Cyclescheme vouchers, for details of how to place an order with a voucher please click here.

All purchases and refunds will be processed in Sterling (GBP). We are not liable for any currency fluctuations. Please be aware that this may result in your refund being less or more than what you originally paid in your local currency.

Impact of COVID-19 on Delivery
We are monitoring the impact of the COVID-19 coronavirus around the world. We are in constant contact with our couriers on any potential service impacts. Deliveries may experience a delay with the couriers.

Some items like wheels and rims are excluded from the free delivery promotion.

Bikes
All bikes are checked in our workshop prior to dispatch. Bike orders are typically dispatched within 48 hours of your order. Please note - most bikes are delivered partially assembled - this varies from model to model, please call to confirm what building is required prior to ordering.

Delivery for International Orders
All international orders, including countries within the EU are sold exclusive of VAT but may be subject to import duties and taxes, which may be levied once a shipment reaches your country. Only orders over £150.00 will be processed and shipped for countries within the EU. For details of current customs charges please contact your local Customs authorities. UK VAT is not charged for orders delivered outside of the UK.

Is your country not listed on our website? Feel free to get in contact with us and we will quote you a price! Message us on our Contact Us page and make sure to include your postal code/zip code. We will not be able to deliver to PO BOX and BFPO addresses.

We will always try our best to meet agreed delivery times, however we cannot guarantee them due to third party couriers or workshop load. We shall not be liable for any consequential losses due to delayed delivery times.

The delivery charge for any international orders returned due to unpaid customs and duties charges will not be refunded.

Billing & Delivery Addresses
Please ensure your billing & delivery address is correct when placing your order. We will do our best to ensure that all our customers receive their order but we are not responsible for any mis-delivery if the delivery address is incorrect.

Stock Check
The majority of our products are usually in stock and we try to keep our stock levels as up-to-date and as accurate as possible. However sometimes our system may not be updated in time and a product may be out of stock despite the product page showing it as 'In Stock'. If you are interested in a product and would like to double check the availability of it, please feel free to contact us before placing your order.

At Triton Cycles we aim to provide a returns service that is simple and hassle-free.

Should you need to return anything to us, it is very important that you telephone us first to advise us of your intention and the reason why you wish to return the goods. If you're not completely satisfied with an item you may return it within 14 days of purchase, and as long as the item isn't fitted or used we're happy to receive it back for a refund or exchange. Return shipping costs in this instance are non-refundable.

If the item is being returned as a result of our error i.e. damaged, defective, wrong item sent etc, we will refund Royal Mail First Class or Standard Parcel postage costs. If this is the case please include a copy of your purchase receipt when you return the goods for inspection. Please DO NOT sign for goods if you think that they are damaged, or the packaging has been tampered with. Instead, refuse to accept the delivery and contact us immediately(within 3 working days) so that we can take the matter up with our courier. Replacements will be sent to you as soon as possible. Signing for goods later found to be unacceptably damaged in transit complicates negotiations with the courier in dealing with your complaint. However, if a minor component is missing or broken(e.g. a reflector) please DO NOT return the whole bike. Simply contact us and we will replace the part as soon as possible. Please DO NOT discard any original packaging until you are fully satisfied with your purchase. Should you need to return a bicycle, couriers will not transport a machine not in the original or suitable packaging. Warranty Claims: All goods purchased from Triton are covered by a full warranty and generally covers manufacturing faults and defects including poor workmanship. If you think your item is faulty and would like to make a warranty claim then please phone/email us before returning any goods - we may be able to solve your problem without you incurring any postage costs.

All purchases and refunds will be processed in Sterling (GBP). We are not liable for any currency fluctuations. Please be aware that this may result in your refund being less or more than what you originally paid in your local currency.

The delivery charge for any international orders returned due to unpaid customs and duties charges will not be refunded.